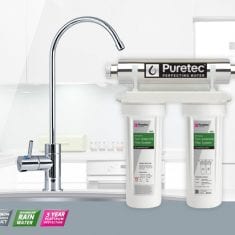 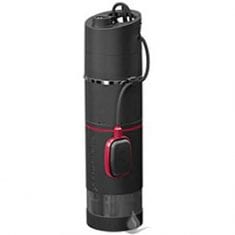 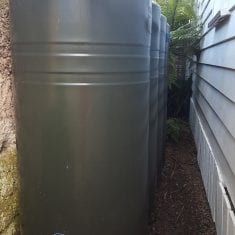 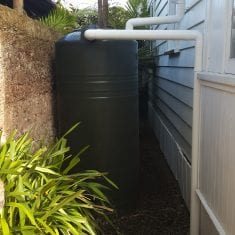 Last summer, we were contacted by a client in Devonport with a request for a quote for a Rain Water Harvesting system. The client had become increasingly conscious of her sky rocketing water bills and resented paying so much money for something that “falls out of the sky”.  In addition she had developed a healthy paranoia about the ‘imminent breakdown of modern day society and our reliance on city power and water’. She therefore wanted to be as “off-grid” as possible.

After doing some research online she found the team at Think Water Auckland were the guys to speak to.

After our first site meeting, it was clear she wanted more than just a tank and garden tap. She wanted to collect the rain water and use it for as much as possible. We suggested some outside taps, plus running the washing machine and toilet off the Rain Water system, but she wanted more than that. We came up with a plan to install a tank and pump and connect to a fully automated 2 zone Irrigation system, outside taps, washing machine, toilet and a Undersink Water Filtration System, giving her the ability to drink the tank water.

Being on a relatively small section meant there were restrictions to the size of the tank we could use. It was decided the most suitable tank and pump system would be a Bailey 4000lt Slimline tank and Grundfos SB submersible pump. The dimensions of the Bailey 4000lt Slimline tank (2.1m high, 2.9M wide and 0.87m Deep) meant it could be “tucked” away nicely down the side of the house, out of way and out of sight. The Grundfos SBA3-45 submersible pump is silent when submerged in water and therefore a noiseless alternative to surface mounted pumps. This also means no pump cover is needed and makes them much less likely to be stolen or tampered with. A Jobe Rojo part fill float valve was installed in the top of the tank from the city mains to maintain a minimum of 800lt in the tank whilst maximising the available capacity to capture as much rain water as possible. With an air break of 200ml between the over-flow line and the float valve, it insured no cross contamination of city water and tank water. The Puretec Ecotrol ESR2 Series was the choice of undersink water filtration. With its 5 micron pleated sediment and 1 micron Silver impregnated moulded cartridges, plus ultraviolet technology meant 99.9% of bacteria was killed. Leaving safe, healthy, crystal clear rain water for  drinking and food preparation.

The client, being a very keen gardener and vegetable grower also required that we install a fully automated 2 zone Hunter Irrigation system. Comprising of Hunter MP Risers and Micro-jet sprays and connected the Irrigation, house toilet and washing machine to the Rain Water System.

After the successful completion of the instillation, the client was very happy with the investment she had made. As a self-confessed “Doomsday Prepper” she has now gone a further 1 step further and had a back-up generator installed to make sure she has running water from the tank even after a power cut. She’s very thankful for the work we completed and the knowledge she’s gained while dealing with the team at Think Water Auckland.