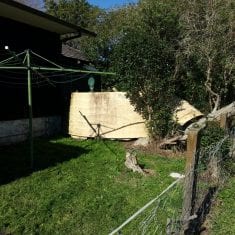 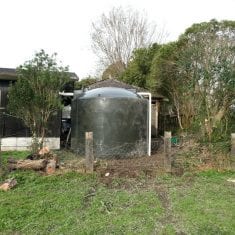 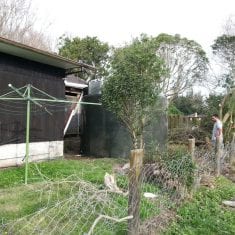 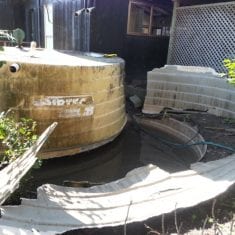 Thinkwater Auckland were contacted by a property manager after a water tank on a rural property had exploded, the tank was found to be an old fibre glass water tank of around 15 – 20 years of age.

After investigating the cause of the failure it was determined that the trees surrounding the tanks had grown roots below the tanks sand base, these roots over time had increased in diameter causing a point load on the tank base, this had caused a minor crack in the base, over time this crack migrated to the wall of the tank, and once it reached the wall “where a majority of the load is carried” the tank failed in an impressive fashion, at the time of failure the tank was 100% full, so 25,000 litres had to go somewhere, lucky for the client the tank bordered a horse paddock which gave the water an escape route, if this had not been the case major damage could have been caused to the houses foundation.

This left the client with no water at all and Think Water Auckland were called in to assist. Within 24 hours of the initial site visit a new water tank was delivered, installed, plumbed in and filled via a water delivery service, once topped up the clients pump system was returned to normal.

The images show the aggressive nature of the tank failure and illustrate the importance of correctly installing and maintaining tanks and their foundation bases, tanks are typically installed, filled with water and forgotten about other than to periodically check the water level. It should be remembered that the water tank is holding up 30 Tonne of water so if the tank is showing any signs of damage or a collapsing foundation measures should be put in place to correct the issues before a failure occurs.